The Euro took a serious hit in Friday’s trading session, racking up its biggest one-day loss against the euro in over 4 months as fears crept in about tapering from the US Federal Reserve which many see as the first step before interest rate hikes are introduced in the world’s biggest economy.

The catalyst for the Euro’s decline was the release of the US Core PCE Price Index, which hit the market at a healthy 3.6 percent which shows inflation is still well above the Fed’s target rate of 2% and paves the way for a reductions of the US Central Bank’s stimulus program as early as this month.

Even quarterly GDP figures from the Eurozone, which have returned to the pre-pandemic levels at 2.2%, and last month’s inflation figures which came in at a whopping 4.1% failed to help the European currency as the European Central Bank is currently convinced the high numbers are temporary and a result of a post Covid pandemic buying spree.

Looking ahead today, we have already seen the release of monthly retail sales figures from Germany which came in at -2.5% against analysts’ expectations for a figure of 0.6% while the yearly figure was also disappointing coming in a -0.9% against consensus for a number of 1.8%.

The key news to look out for will be the release of the Markit manufacturing and ISM manufacturing figures from the US which should paint a clear picture on the current state of business conditions and cause more pain for the Euro should the numbers come in strongly. 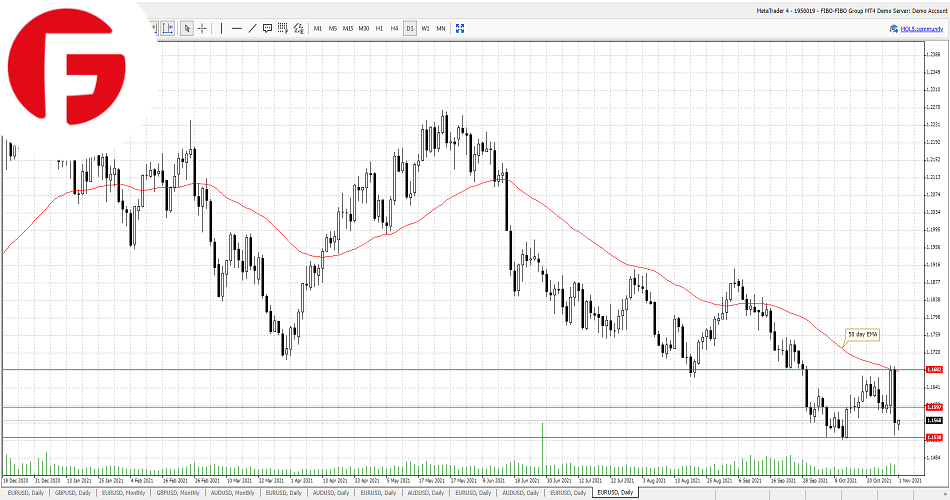 From a technical point of view, the EUR/USD currency pair was once again firmly rejected at the $11682 level and the 50 day EMA and it is hard to see the pair over coming this critical mark and especially before Wednesday, when the Fed will announce their latest interest rate decision followed by their tapering plans.

A retest of the yearly low for the EUR/USD pair at $1.1524 before this news is a real possibility and only a dovish message from the US Central bank may save the Euro moving towards the $1.1500 mark.