The Euro plunged to a new 20 month low in yesterday’s trading session against its US counterpart after the latest minutes meeting from the US Federal Reserve where we saw the strongest signal to date with regards to tightening monetary policy.

With inflation in the US currently running at over 6%, more than 3 times the Fed’s target rate of 2%, board members noted that should the runaway figure persist, they will have no hesitation on cutting back the stimulus program and raising interest rates.

“Various participants noted that the Committee should be prepared to adjust the pace of asset purchases and raise the target range for the federal funds rate sooner than participants currently anticipated if inflation continued to run higher than levels consistent with the Committee’s objectives,” the minutes stated.

Traders are now predicting the Fed will raise its benchmark rate three times in 2022 by 25 basis points at a time which is on top of a reduction in the Fed’s bond buying program which should be concluded by March.

As we enter today’s trading session, we have already seen the release of the release of GDP figures from Germany which hit the market at 1.7% against analysts expectations for a figure of 1.8% while the GFK consumer confidence survey came in at -1.6% which was well below consensus for a number of -0.5%.

Due to the Thanksgiving holiday in the US the American markets are close but we may see a bit of volatility later on in the day when ECB president Christine Lagarde delivers a speech on monetary policy. 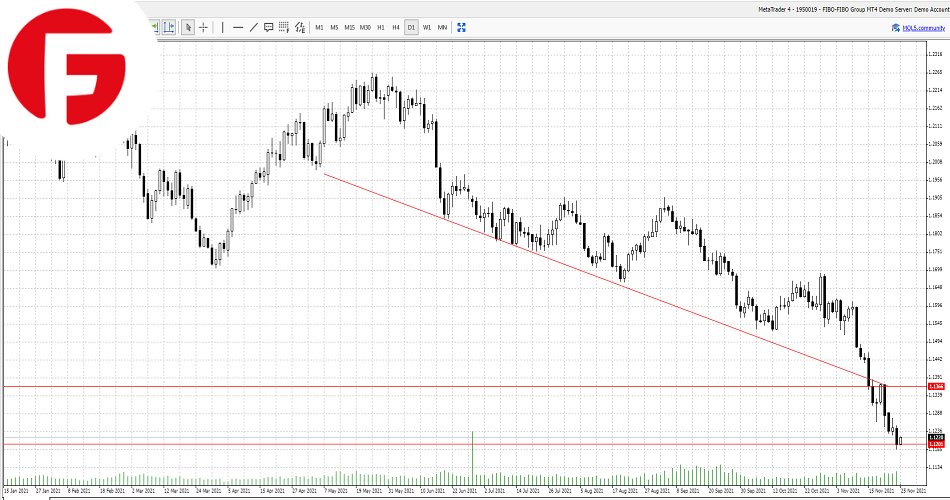 From a technical point of view, the Euro continues to break key support levels and has currently found a new one at around $1.1200 which it has bounced off today.

We may see the EUR/USD currency pair trade sideways for the rest of the day due to the holiday in the US but this may all depend on the tone of ECB Lagarde’s speech later in the day.