The Euro continued its upward trend in yesterday’s trading session, hitting a nearly 2 month high against the greenback which in many ways surprised investors considering the release of the latest inflation figures from the US yesterday.

The consumer price index (CPI) increased at a 7 per cent year-on-year pace last month, slightly from the 6.8 per cent rate registered in November and the largest jump since June 1982. The figure now sits at its highest in 40 years and all but guarantees that the US Federal Reserve will embark on their rate hiking cycle beginning in March.

The Euro bulls brushed off the news by taking long positions which likely means that the market moved to quickly in recent weeks by placing bets on the US dollar on the basis of rate hikes which were already factored into the market.

Another reason the Euro is finding support is because not only is there high in3flation in the US, but also the Eurozone and some market participants are now speculating that the European Central Bank will also need to raise interest rates and a move upward of 10 basis points is likely to come sooner than later

Looking ahead today, it’s a quiet day ahead on the economic calendar from the Eurozone although there maybe interest in speeches expected to be delivered by De Guindos, Hakkarainen, and Elderson from the European Central Bank.

During the US session we will see the release of the latest initial jobs claims figures and the all-important producer price index numbers would should create some movement in the Euro. 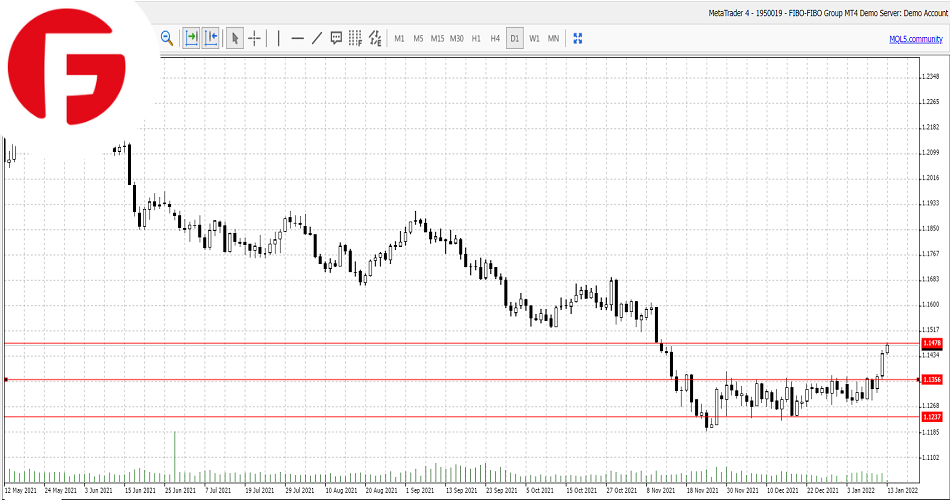 As we can see on the chart, the EUR/USD currency pair has finally broken out of the tight trading range between 1.1237 and 1.1356 where it has been stuck for the best part of 2 months.

The pair is now using the 1.1356 mark as a support level and has pushed significantly higher in today’s trading session to reach the next resistance level of 1.1478.

The strong resistance point will probably be hard to crack until there is more clarity on if and when the ECB plans to hike interest rates.